The next topic for CCNA is:

1.2 Select the components required to meet a given network specification

I wish the blueprint would have been a bit clearer on what they mean with this topic but it’s reasonable to think that it’s about picking routers and switches depending on the networking requirements.

Picking a router or switch will depend on what kind of circuit is bought from the ISP, if the service is managed, the number of users on the network, the number of subnets needed and if there are requirements for NAT and/or firewalling among many decision points. Since this is the CCNA RS we will pretend that devices such as the Cisco ASA does not exist which can be used for small offices to do both firewalling and routing.

I’ll give different examples and we’ll look at which devices make sense and why to pick one device over another.

The MPLS VPN circuit is a managed service, meaning that the ISP will have a Customer Premises Equipment (CPE) at the customer. In other words, the ISP will put a router at the customer that they are responsible for managing. We have 10 users, that’s more than most routers support without connecting a switch to it although some models can use a EHWIC with a switch module that has 24 ports. There’s only one subnet which means that no local routing is necessary. There is no need to NAT or to do firewalling, which are typical router features. This means that we can connect a switch to the ISP router and be done with it, a 24-port switch would fit nicely in this scenario. 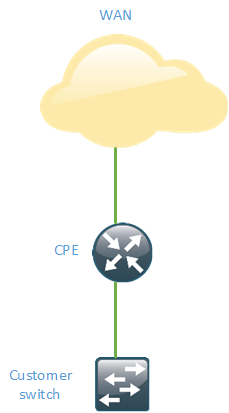 What if we add another subnet? One subnet for data and one subnet for voice or wireless for example. This means we need to do local routing. We now have two options, either to trunk to the ISP CPE and do the routing there or to put another router behind the CPE. If we do routing at the CPE, we will be restricted by how much forwarding the CPE can do. We may also be restricted by any QoS policies that are configured at the CPE so the choice to add another router will mostly depend on bandwidth needs and the need for other features such as NAT.

Now, what if we want to have local Internet access at the site? In that case we would certainly add a router so that we can do NAT, filtering and setup routing towards the MPLS and Internet circuits. 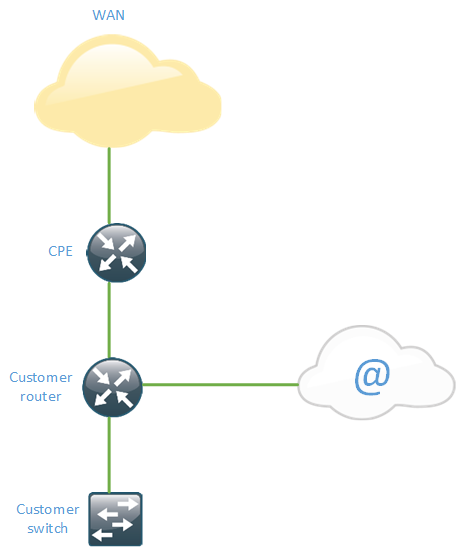 What about this scenario?

This leads us to select a router. We only have three users which is doable in a router such as the 800 ISR router which has 4 switch ports builtin to the router. We don’t need a separate switch at this time but one could be added later if the number of users increase.

The distinction between a router and a switch is not as clear as it used to be these days. There are still some features that are router only though and these are mainly NAT, GRE or other tunneling, VPN, firewalling features. Doing routing on a switch may require a certain model of the switch and/or a certain license. When thinking about selecting a router or a switch, consider the bandwidth needs, the number of users and if you have the need for features that are only available in routers and not in switches.

This concludes part two of the CCNA series. Good luck with your studies!